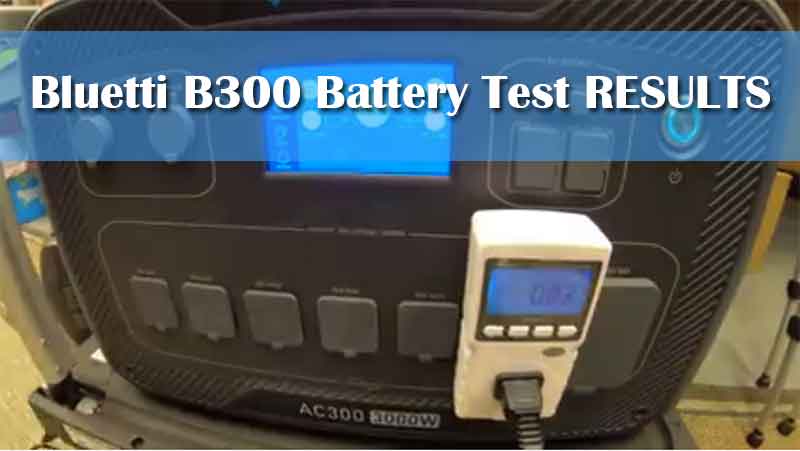 Bluetti B300 Battery Test RESULTS – The future Bluetti’s not only going to have a big Halloween sale starting later today but their flagship AC300 model is back too. I also brought new incredible results from the future Marty through the space-time continuum about their B300 battery new results.

I found out some details about Bluetti’s Halloween sale event, and we’re going to talk about that in a bit. But I know what you guys really want to hear about is that I got a set of new B300 batteries, and I spent the last few days testing them out. The results are actually quite shocking my neck, and of course, I took the new B300 batteries into my secret laboratory and performed a double-fisted battery capacity test.

So, previously the results of both of these tests were actually quite poor, and when Bluetti found this out, they were very surprised. Because they told me in our own laboratory test where we’ve discharged these batteries like 100 times using various loads, they always score into the mid to upper 80% range. My results after several repeated tests came out to only 72% on the old battery. For this reason, many of you were going to pass on the AC300 until they corrected the problem.

Now, the problem seems to have been not the AC300 itself, but the actual B300 battery. The first battery they sent me apparently either through shipping damage, or just dumb luck. My first B300 battery had a dead cell in it. At least this is what the math is telling us because the first battery scored 2,220 watt-hours out of 30 – 72. The replacement battery which is this one, from the time-lapse scored a whopping 2,760 watt-hours or 540 watt-hours more.

That’s more than a minor discrepancy. There’s obviously a dead cell in the old battery. This now puts the Bluetti AC300 battery at 90 efficiencies. Only one single point behind the EcoFlow Delta Pro scored 91 on the identical test. And since the Delta Pro not only is available for retail sale yet but isn’t even available for a pre-order at the much higher price of 3,599, the top-dog on the market right now.

Today is this model the Bluetti AC300 for under three grand, and that’s with my discount I believe the final price during this limited time sale for the base model which is what you see here with one battery is going to be 2,989. But you could verify the price of the bundle that you choose by adding it to your cart. There’s a link below with a bunch of different bundles that you can get, and each one has a different code that gives you a different discount. So, pick the one you want to put in your cart, put that code in your checkout, and then that will give you the final price.

Now, I did have a bunch of folks ask me to do a 12 volts discharge test on this battery. I didn’t have time to do it last time, but I did do it this time. That was the second fist in the double-fisted test now. When I did this test, I did it with just the battery. I didn’t have this turned on or even hooked up. So, we’re talking 12 volts right out of the 12 volts socket of the battery itself. No connection at all to the AC300.

So, those results were 2,454 watt-hours out of 3,072, or a respectable 80%. There are older Bluetti products that can do a lot better than 80, but then there were some more recent Bluetti products that didn’t do as well as 80 on this test. So, this one’s pretty typical middle-ground for Bluetti. You’re only going to really care about the results of that test, if you plan on running a 12 volts refrigerator from the battery separately, I think most folks are going to buy this, and keep it paired up, and probably use the inverters and USB ports and stuff more than they would a 12 volts port.