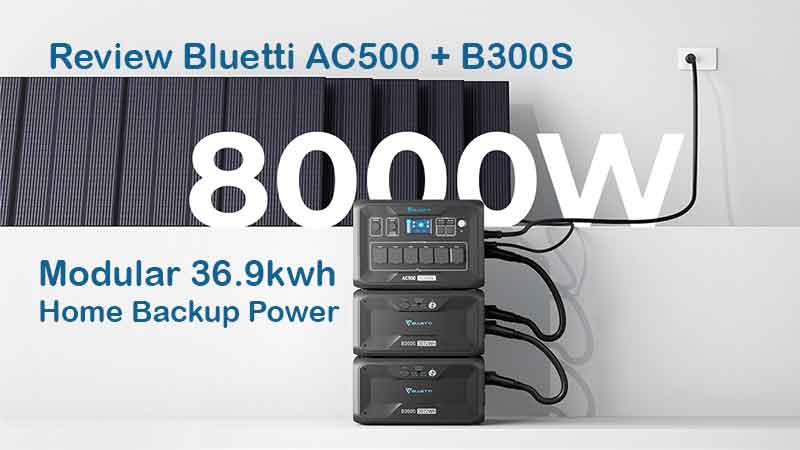 So, this can handle the most demanding power needs. You can imagine the AC500 doesn’t have any batteries inside. It’s just the inverter charge controller and electronics to power this beast. You can attach up to six of the new B300s battery packs that use long-lasting and super-safe LFP batteries.

Each pack is 3 kilowatts, so you can expand this to an unreal 18.4 kilowatts of storage. Not enough power? Well, you can combine a pair of AC500s together with Bluetti’s fusion box to power 220 volts split phase appliances up to 10 kilowatts, like air handlers, induction stoves, and well pumps, all in.

You can have up to 36.9 kilowatt-hours of storage between the 12 battery packs you can connect. Just hook the units together, and you’re done. Everything is controlled by a super-friendly smartphone app that works with wifi or Bluetooth. It’s super simple and elegant.

The new AC500 uses the same size chassis as the older AC300. But somehow, increases the AC output from 3,000 to 5,000 watts scales. The input is from 4,000 to 6,000 watts and allows for one and a half times more battery packs. The AC500 weighs 66.2 pounds and Bluetti includes the AC charging cable, DC charging cable, and car charging cable in the box.

The B300s is a 3,000 kilowatt LFP battery. That’s a pretty big upgrade from the B300 battery that launched with the AC300. Why? Because it supports a higher solar input and has integrated heating pads to keep the battery working in freezing temperatures. It’s a compact design, that’s meant to be stacked with the AC500 and weighs a heavy 79.6 pounds.

It includes the battery extension cable to connect it to the AC500 and an MC4 to XT90 solar charging cable in the box. The biggest question was whether this new B300s battery pack is compatible with older Bluetti units like the AC300 and AC200Max lines. And unfortunately, the answer is NO.

This is only compatible with the AC500. However, the AC500 can use the older B300 battery packs. If you already have those in your system, but you’re limited to 4 batteries versus 6 with the B300s, this system is designed to be a powerful plug-and-play. The whole home backup system setup is super easy. Just connect the B300s to the AC500 with the included heavy-duty locking cable, and turn it ON.

Both are covered by a 3 years warranty. The front panel is nicely organized and has all the outputs in one spot with a color touch screen to control everything. You can also control the AC500 with Bluetti’s smartphone app that works with IOS and Android.

On the left are the fully regulated DC outputs. There’s a powerful 30 amp 12 volt RV outlet and a 10 amp 24-volt car outlet. If you need a 12 volts cigarette-style output, you can use the output on the B300s. You can output from all DC ports at once for up to 720 watts of dc power which is perfect for doing a van build.

On the right, there’s a pair of powerful 100 watts USB-c outputs, and four USB-a outputs. There is two standard 15 watts and two 18 watts power delivery. There’s a large dual wireless charging pad on top that can charge two devices at once, like an iPhone and AirPods case.

Along the bottom is the AC output for the 5 kilowatts pure sine wave inverter that’s capable of a 10 kilowatts peak. There are three standard 120 volts 20 amp 3 prong outlets. That’ll power pretty much anything. You can plug into the wall even with heavy draw appliances and power tools. They also offer two different 30 amp outlets, and a super beefy 50 amp plug to connect to your home’s transfer panel or RV electrical system.

On the right-hand side of the unit are AC and DC inputs, and a communication port to sync two units with the fusion box for split-phase output. There are two battery ports that connect with this super beefy cable that locks in place.

In my early tests, the AC inverter worked flawlessly and can easily power three 1500 watts of space heaters for 20 minutes without even breaking a sweat. In fact, the fans are super quiet even when pushing this hard. The AC500 can act as a UPS. So, you can plug in critical loads and the unit will automatically switch from wall power to battery when the grid goes down.

To test inverter efficiency, I discharged the 3 kilowatt-hours battery over 5 hours at a point. Two C test with a 500 watts load and was able to pull 2,640 watt-hours of the 3,072 watt-hours rating which translates to an 86 efficiency. Very impressive compared to the 80 average IC, especially, for such a large powerful inverter for charging the integrated wall charger is incredibly powerful, and can.

Basically, power this as fast as your home’s wiring can handle up to 240 volts at 50 amps with a standard outlet, expect 1600 to 1,700 watts. But you can connect this to a 240 volts plug, or even an EV charging station with a separate adapter to charge. It is close to 5,000 watts which is so impressive for solar.

The AC500 has a pair of MPPT inputs inside, and can each accept 12 to 150 volts. A single cable connection has a pair of MC4 inputs on the other end. Since there are two separate DC inputs, you can have different voltages in play on each one. So, you can charge from 150 volts solar array on one and a much smaller solar array on the other, or even a 12 volts car charger.

I was able to charge this with my 800 watts solar array in a 4 serial 2 parallel configuration. But, I hope to upgrade my setup to charge this even faster.

Lastly, you can trickle charge this through the car charger or a standard 12 volts battery at 10 amps. I also tested the standby losses with all the ports ON, but nothing connected, and this unit only lost about one percent per hour which is quite good for such a powerful inverter.

And in fact, it’s better than some of the smaller Bluetti units. I’ve tested one of the best features is the B300s battery can be charged and discharged independently of the AC500. You can plug 500 watts of solar directly into the B300s MPPT controller, and also recharge it from a standard Bluetti wall charger up to 470 watts.

Best of all, you can directly tap into the battery through the 12 volts cigarette port 100 watts USB-c, and 18 watts USB-a ports. This is a killer feature because if the AC500 stops working for some reason in an emergency, you can still use the batteries as a DC-only power station.

Overall Review Bluetti AC500, my initial impression is that the build quality is excellent and the sleek modern design and well-thought-out feature set make this a winner. If you want a powerful modular system that can scale to handle the needs of pretty much any application, this is the one to get.